quest #1 the people we met

To be honest; two of our three groups weren’t as succesful as hoped for, but everyone had a lot fun, despite the rain and the party compensated what the quest lacked. In case you wondered, why all this is in englisch again: Most of the people we talked to, were from anywhere but germany and it would be a little unfair if we didn’t gave them opportunity to understand what we say about them.

So we met sunday at around 11h at the entrace to the fleamarket in Mauerpark – of course only a minority was there on time (first lesson for the next quest: either a later start or a different day).

After an half hour on the fleamarket we got our initial items:

Erik, Taty and me opted for some cat/purse/Berlin-leather-thing with a face. The woman selling them, designs them herself, but have them stitched together in india.

Thore and Mandala went for a different strategy and returned with an assortment of trinkets which they thought would give them advantage through choice.

Oliver and Claudia chose a CD with housekeeping songs (sample? here you go) 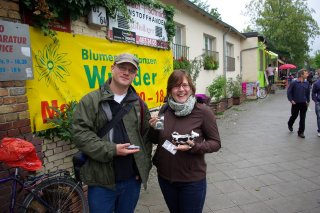 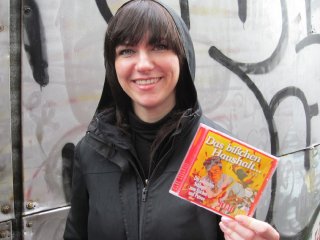 Unfortunately neither of the latter groups had that much success during their swap and only swapped once, although Olli and Claudia had a late start:

The third group however was a little more successful, both in terms of swaps and stories – though I got to admit we kind of “down-valued” with each swap to make it possible:

Thanks everybody for participating and happy swapping

P.S. I will follow up with some party pictures, including the crowned kings and queen, and a post with the lessons we learned in quest #1 which we will apply to the second istallment in late August.

This entry was posted in quest # 1, swapquest. Bookmark the permalink.

4 Responses to quest #1 the people we met